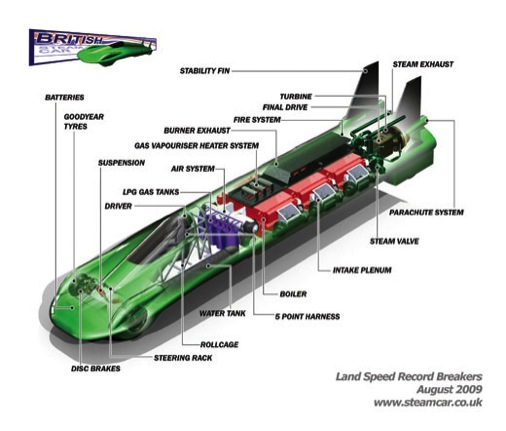 Since the beginning of time mankind has wanted to break barriers by travelling ever faster. The current speed record for a wheeled car on land is 763mph, set by Andy Green on 15th October 1997. Wing Commander Andy Green was driving Thrust SSC, the first car to officially break the sound barrier. Trust SSC was powered by two Rolls-Royce Spey jet engines.

On the 25th of August 2009 a steam powered car, driven by Charles Burnett III recorded a new land speed record for a steam powered vehicle with an average speed of 139.843 mph. The record was recorded over two runs, in opposite directions (within an hour) over a measured mile. This allowed it to be ratified by the FIA.

A day later the same car, this time being driven by Don Wales, broke a second record by achieving an average speed of 148.308 mph. The record was again recorded over two runs, in opposite directions, however, this time over a measured kilometre. This again allowed it to be ratified by the FIA.

The steam powered car was called the “British Steam Car”. Built by a small core team of 15 individuals on a farm in Hampshire UK, the car was chosen by CNN and Time as one of the best innovations of 2009.

The specification of the car is very different from your normal run-about shopping car. It is powered by a two stage steam turbine rated at 360hp which drives the rear wheels. The car has to carry all the items that are needed to generate steam in its 7.6 meter length body. The front of the car carries the steering rack and driver. Behind the driver sits the water and LPG tanks, the water to generate the steam and the LPG to provide the fuel for combustion. The LPG and water is fed to the 12 superheated boilers which operate at 40 bar and 400°C. The car has a parachute system to help stopping the car, and twin tail fins to aid stability. Whilst the chassis is made from steel, the body of the front of the car is made from carbon fibre composites, just like a formula one racing car. All this adds up to a weight of approximately 3 tonnes.

The Porsche 911 Carrera has been one of the benchmark sports cars over the last 40 years. When comparing this record breaking steam car to the latest Porsche 911 Carrera we see some surprising similarities and some not so surprising differences. The steam car develops 360 hp, very similar to the Porsche’s 350 hp, and both drive their rear wheels. The Porsche however weighs in at approximately 1.4 tonnes (with all creature comforts you could want), significantly lighter than the steam car which weighs in at 3 tonnes. The weight of the boilers and all the equipment needed for steam generation contributing to the 3 tonnes weight.

A steam powered car is never going to replace the current internal combustion powered car, due to the weight of boilers, turbines etc. However whilst the British Steam Car must be considered a technical achievement it is an even greater advert for modern steam engineering showing what can be done using the unique and versatile medium that is steam.