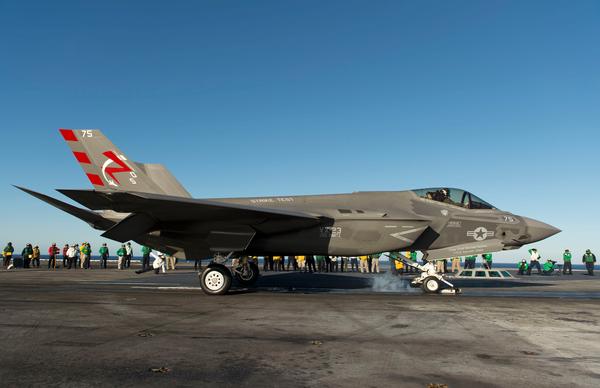 The carrier variant of the Lockheed Martin F-35 Lightning II combat aircraft has completed more than 100 steam catapult launches and arrested landings during its first two weeks of sea trials, aboard the USS Nimitz as of the 13th of November.

The two C-model test aircraft on board Nimitz, have already satisfied 95% of the threshold requirements for the first of three rounds of sea-based development testing. As of 13th November the aircraft had completed 102 catapult launches and 104 arrested landings with a redesigned tailhook, according to data provided by the F-35 programme office. The pace put tests on track for completion ahead of the scheduled 17 November end date.

There are critics of the aircraft and indeed the program, due to cost overruns and technical issues. The F35C having tail hook problems in tests in 2011. The distance from the hook to the main landing gear being so short that the aircraft would not catch the landing wires on a ship’s deck reliably. The revised design now appears to have solves this problem.

The F-35C is the carrier version which is part of the joint strike fighter program. This 5th generation aircraft is being built in 3 versions. The F-35C variant has larger wings and more robust landing gear than the other variants, making it suitable for catapult launches and fly-in arrestment’s aboard naval aircraft carriers. Its wingtips also fold to allow for more room on the carrier’s deck while deployed.

The nuclear powered aircraft carrier USS Nimitz is powered by two Westinghouse A4W nuclear reactors. These produce the heat energy to generate steam. This steam is used by the four steam turbines on board to propel the ship. However some of this steam is piped to where the steam catapults are located, below the decks on the front portion of the ship. There are two “bow”, and two “waist” catapults on board.

A steam catapult consists of a steam accumulator, two cylindrical tubes which run under the deck, two pistons which run inside these tubes, shuttle which is visible at deck level and which the aircraft is attached to, and a launching and exhaust valve. The aircraft is attached to the pistons/shuttle, and when it is ready for launch a steam valve off the accumulator is opened. The steam pushes the pistons down the tracks very quickly which accelerates the attached aircraft. As the pistons approaches the end of the tracks the aircraft detaches itself from the shuttle and flies away (having reached/exceeded its flying speed). The pistons are then slowed towards the end of the tubes by a water brake. With the launch complete the pistons can be moved back to the start position ready for the next aircraft launch.