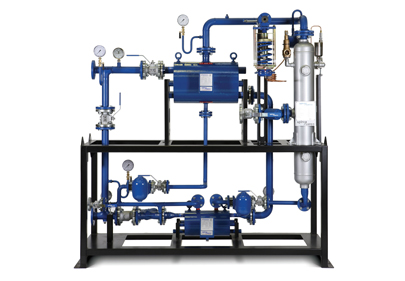 Energy saving is always a hot topic and one such system designed to provide savings is the FREME package. First let get the acronym explanation out of the way! FREME stands for Flash Recovery Energy Management Equipment (who makes these things up!). Manufactured by Spirax Sarco it is ideal for condensate return systems which have high condensate return percentages with high flash steam percentages.

Condensate return first goes through a flash vessel in the unit. Of the top of this vessel is a heat exchanger for the flash steam, while off the bottom of the vessel is steam trap and then a heat exchanger for the condensate. The two returning streams are then recombined and sent back to the boiler feed tank. At this point the combined stream is sub-cooled, so it is sufficiently warm to begin heating the cold feed but not hot enough to overheat the feed tank.

As a rule of thumb for every 6°C rise in boiler feedwater, 1% is typically knocked off the boiler energy bill using condensate returned from the steam distribution system to heat boiler feedwater.

The FREME system was originally designed for condensate return systems from a corrugated cardboard producing machine. Competing with other systems like the Baviera and CBA to use the energy in the condensate coming off the cardboard forming machine. The FREME has however been used in other industries with success, including laundries, and the food sector. The FREME won the IChemE innovation and excellence award in energy in 2009, and was the runner up in the Cabon Trust Innovation for energy award 2010 and CIBSE low carbon performance award in 2010.