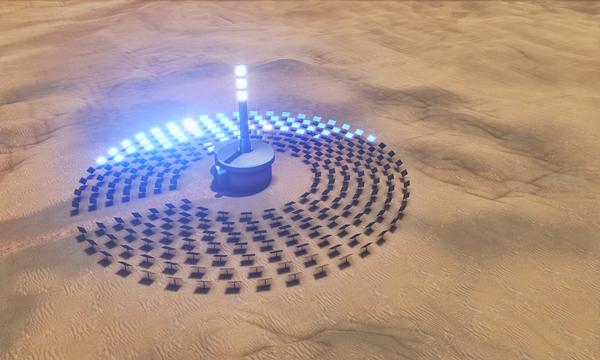 Following on from our last article on concentrating solar thermal power plants, this article will look at the impact that these plants could have in the future.

To generate efficient electricity on a large scale the solar radiation from the sun needs to be concentrated, by using mirrors and lenses. Concentrating solar thermal plants do this, concentrating the light from the sun to create heat, which is then used to run a steam turbine which turns a generator to make electricity. A reflector area of just 20 square meters in a solar-thermal power plant is enough to supply all the electricity one person needs day and night with no carbon emissions.

One idea that caught our attention and which we rather like is championed by the Desertec Foundation. Created four years ago under the auspices of Dr Knies its founding chairman, it calls for concentrated solar plants to be used in desert sites to generate electricity. The foundation was formed to bring together the concepts of politicians, scientists, and economists from around the Mediterranean. Work which first started in 2003.

Whilst all kinds of renewables will be used in the Desertec concept, in both centralized and decentralized solutions, the sun-rich deserts of the world are to play a central role. Within six hours deserts receive more energy from the sun than humankind consumes within a year. In addition, 90 percent of the world’s population lives within 3,000 km of deserts. Desertec‘s idea is for this to be applied across the world by using low loss HVDC transmission.

Thanks to heat storage tanks, concentrating solar-thermal power plants in deserts can supply electricity on demand day and night. This makes them an ideal complement to fluctuating energy sources such as wind and photovoltaic power and allows a higher percentage of these variable energy sources to be used in the future electricity mix.

Whilst it would require solar panels on less than 0.5% of the desert surfaces to supply enough power to feed the energy requirements of the entire globe, the foundations plans are more modest. The aim on record is to supply enough power to meet the needs of North Africa, with surplus being potentially shipped to Europe. They believe that by 2050, 125GW of power could be generated in North Africa.

Algeria has a generous feed in tariff for CSP and has pledged to invest $20bn by 2030 in CSP plants, while Morocco has 2 GW of solar planned by 2020 and is looking for a 40 percent renewable energy contribution by 2050.

A few facts and figures:

HVDC transmission is a way of carrying clean electricity over long distances to the places in the world which consume large amounts of energy. Around 90% of the human population live less than 3000 km from deserts and could be efficiently supplied with clean desert electricity. The line losses are very low, only around three percent per 1000 km, and the extra cost is only one or two cents per kilowatt hour. This is more than compensated because solar power plants located in deserts are much more efficient due to the longer and more intensive solar irradiation and less winter months. The same is with wind power plants that benefit from stronger and more constant winds at optimum sites. An extended grid and connected backup power plants compensate for fluctuations in renewable energies and downtime in power plants and transmission lines.

There are dozens of lines up to 1700 km long (Inga-Shaba, Democratic Republic of Congo) with capacities of up to 5 gigawatts (Yunnan-Guangdong, China) already in operation around the world. HVDC lines are also used in Europe: Sardinia is connected to the mainland by undersea HVDC cable and there is a whole network of HVDC connections between central Europe and Scandinavia. HVDC lines take up less space than conventional AC power lines and can be laid over long distances underground. This increases public acceptance and means the network can be extended faster.

We hope that the vision of concentrated solar power plants playing an ever increasing part in energy production both in North Africa and the rest of the world comes to fruition, and that it   combats global warming, ensures a reliable energy supply and promotes development.