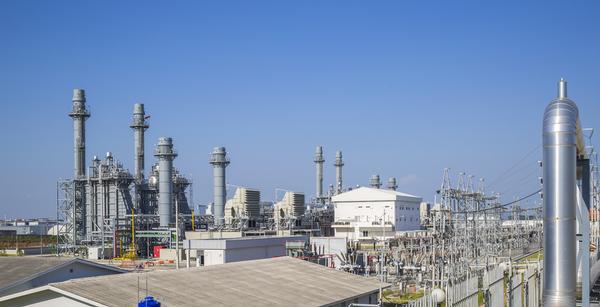 There are many power plants across the globe that use gas turbines to generate electricity. Steam plays an important part in the production of electricity on these sites, including the use of steam injection into the gas turbine itself.

Whilst Sir Frank Whittle, is hailed as the father of jet propulsion and the contribution he made to the development of the industrial gas turbine was significant, (his focus was in the field of aircraft propulsion however) there is no doubt that the Brown Boveri Company (BBC) in Switzerland with their 4,000 KW Neuchatel machine can be credited with the first practical industrial gas turbine.

During development work on an axial flow compressor for use in a cracking process for oil, Brown Boveri realised that the compressor, combined with a combustor, and turbine provided for a workable gas turbine, which could be turned to power production. This was the event that led Brown Boveri to produce a gas turbine that was installed at Neuchatel in Switzerland for stand by service in 1939. The Neuchatel gas turbine had an output of 4,000 KW and an efficiency of approximately 17 percent.

The Brown Boveri company, with the merger with ASEA, changed its name to ABB in 1988. In 1999 the ABB turbine business was taken over by Alstom Power.

The CCGT cycle has made steady progress and together with CCGT the gas turbine has overtaken the conventional cycle reaching unbelievably high cycle thermal efficiencies. In the UK the first CCGT was the Roosecote Station in Cumbria commissioned in 1991 producing 224,000 KW with a thermal efficiency of 49%.

Similar to the combined cycle, where a gas turbine drives an electrical generator and the exhaust gas energy from the gas turbine is used to generate steam in a heat recovery steam generator (HRSG). Instead of a steam turbine, however the steam is used for process requirements. Typical cogeneration applications include pulp and paper plants, chemical production and district heating programs.

In a cogen application some of the the steam generated in the HRSG is fed back to the gas turbine. This is done for power augmentation or to reduce the NOx levels.

This process consists of injecting superheated steam into the head end of the combustor of the gas turbine to reduce NOx emissions. The steam provides a thermal heat sink in the combustor that lowers the temperature reducing the creation of thermal NOx.

For increased power, superheated steam is injected into the combustors and power turbine to increase the mass flow, which then results in increased power output.

There are several advantages using a steam injected gas turbine in connection to Cogen application:

However, there are some drawbacks: