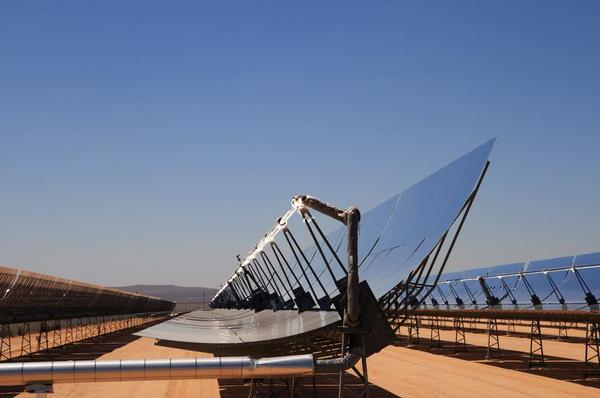 Further to our previous articles on concentrated solar thermal power plants (CSP), we are pleased to hear the news that the first phase of a giant new plant is shortly to begin operation in Morocco. This first phase is called Noor 1. It is part of Morocco’s pledge to provide 42% of its electricity generation from renewables by 2020.

The solar thermal plant at Ouarzazate in Morocco can generate electricity even when the sun has gone down. It does this by using molten salts as the primary heat absorber, which allows for heat storage. Cold molten salt is used to absorb the heat. The hot salt then circulates through a steam generator to run a conventional steam cycle including a steam turbine.

The upcoming Noor 2 and 3 plants of the complex are set to launch in 2017. The two solar plants can apparently store energy for up to eight hours, which would provide solar energy in the Sahara and surrounding regions on a continuous basis. When the full complex is complete, it will be the largest concentrated solar power (CSP) plant in the world. Morocco’s previously useless slice of the Sahara is proving a blessing for solar power. Solar thermal technology only works in hot sunny countries.

The Noor complex is funded by around US$9 billion by international institutions, including the European Investment Bank and World Bank. The Moroccan government guarantees also supported the project, and Morocco’s ruler, King Mohammed VI, provided undisclosed energy subsidies, to prevent the cost from being transferred to energy consumers.

The mirrors at the plant at Ouarzazate cover the same area as the country’s capital Rabat.  Parabolic trough type plants use mirrors which move in a single axis. The mirrors are curved in shape like a trough and reflect the direct solar radiation onto an evacuated receiver (also called an, absorber or collector) featuring a coated stainless steel tube inside a glass envelope. This tube which runs the length of the trough is positioned at the focal point of the reflectors. Within the steel tube a thermal fluid is circulated.

The thermal fluid circulated within the steel tube receiver becomes very hot due to the solar radiation. The hot oil is heated to an approximate temperature of 390 °C and is sent to a heat exchange system where molten salt is heated up. The heat in the molten salt can then be used to generate steam from water. The steam is them used to drive a steam turbine and its attached generator, even during cloudy or night operational periods.