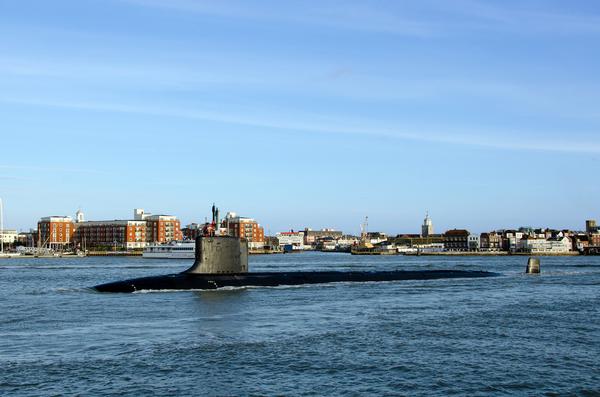 Like or loath them, Nuclear submarines, the vessels that slip silently under the sea travelling for months submerged, rely on steam.

Nuclear powered submarines can generally be divided into two types, the ‘Attack,’ and ‘Bomber’ type.

The attack submarines are designed to hunt and destroy enemy ships and submarines.  Since the end of the Cold War, they have also evolved into multi-mission submarines. Their roles include submarine launched cruise missile platforms, intelligence gathering platforms, and insertion/exfiltration of special forces. These are commonly classified SSN.

The larger nuclear submarines are the ones that are not only powered using a nuclear reactor, but that also carry nuclear armed ballistic missiles. These are commonly classified SSBN.

So why is nuclear power used on submarines, and what is the link to steam?

To answer this we need to examine the history of submarines and the limitations to how they were powered before nuclear was used.

Whilst many inventors played with the idea of a ship which could travel under the waves, submarines only started to become viable in the early twentieth country. By the beginning of the First World War they had become viable weapons of war. Diesel electric propulsion would become the dominant power system. Batteries were used for running underwater and petrol or diesel engines were used on the surface and to recharge the batteries. Early boats used gasoline but this quickly gave way to kerosene, then diesel, because of reduced flammability.

Diesel electric submarines were used extensively by the German Navy in both the World Wars. In the Second World War the standard U-boat being the type VII, of which more than 700 were built. They were around 200ft long, with a surface displacement of 760 tons, and a surface speed of 15 knots, equalling the speed of most surface ships. They had a dive time of 20 seconds to a maximum safe depth of 650ft, a range of over 8,700 miles, and could go seven or eight weeks without refuelling.

The advantage of nuclear power is that oxygen is not needed by the reactor. The result being a submarine that can remain submerged for weeks or months. Nuclear reactors are basically heat engines. As uranium fissions, the breaking apart of atoms releases energy, much of it in the form of heat, which can then be used to do work. This is where steam becomes important. The reactor heat produces steam to drive the turbines that provide the submarine’s actual power. The development of compact, safe, and highly reliable pressurized water reactors for naval use in the early 1950s was the major technological achievement that made nuclear-powered submarines possible.

Reactor generated steam drives not only the propulsion system but also the turbine generators that provide the electricity submarines require for their auxiliary systems. These systems furnish power for equipment cooling and the operation of weapon systems, for lighting and cooking, for climate control and water distillation. Air must be purified and oxygen generated as well, because the submerged submarine is a closed system and must maintain its own atmosphere.

The nuclear propulsion plant uses a pressurized water reactor design which has two basic systems; a primary system and a secondary system. The primary system circulates ordinary water and consists of the reactor, piping loops, pumps and steam generators. The heat produced in the reactor is transferred to the water under high pressure so it does not boil. This water is pumped through the steam generators and back into the reactor for re-heating.

Unlike commercial nuclear power plants, naval reactors and their attached steam systems must be rugged and resilient enough to withstand decades of rigorous operations at sea, possibly under battle conditions.

The sailing of the first nuclear-powered submarine, the USN “Nautilus” in 1955 was soon followed by similar British, French and Russian boats. Equipment was also developed to extract oxygen from sea water. These two innovations, together with inertial navigation systems, gave submarines the ability to remain submerged for weeks or months, and enabled previously impossible voyages such as the crossing of the North Pole beneath the Arctic ice cap by the USS Nautilus in 1958. The limiting factors in submerged endurance for these vessels are food supply and crew morale in the space-limited submarine.