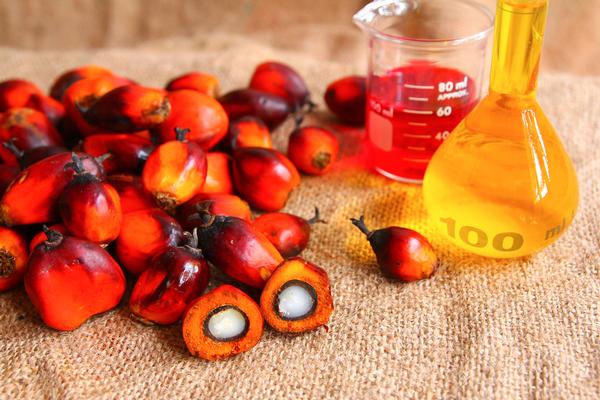 Palm oil is used for food products, detergents, cosmetics and increasingly biofuel. Example products include; shampoo, ice cream, margarine, and lipstick, which all contain palm oil. The list of products that rely on the unique properties of palm oil is long, with one estimate suggesting that about a half of all packaged items found in supermarkets contain it.

In fact, palm oil is now the most widely used vegetable oil on the planet, accounting for 65% of all vegetable oil traded internationally. In addition to this there is increasing use of refined palm oil as biodiesel to power cars.

Steam is an integral part of the extraction and processing of palm oil (including sterilisation and power generation). 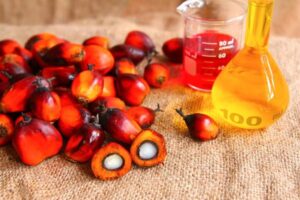 Palm oil is an edible vegetable oil, high in saturated fats, derived from the fruit of the oil palm tree. It is grown commercially in several tropical countries but mainly in Indonesia and Malaysia, which account for 85% of global palm oil production.

Oil palm is highly productive, capable of yielding more oil from less land than any other vegetable oil, with relatively modest inputs.

Palm oil is extracted from oil palm fruits. The oil palm tree has an average productive life-span of about 25 to 30 years. It can reach a height of up to 30 feet and produces fruit bunches from three years of age after field planting. In each productive year, an oil palm tree may produce between 8 to12 bunches of fruit. Each bunch weighs between 10 and 25 kg and contains between 1,000 and 3,000 fruitlets. The fruit bunch itself is cut when it is ripe, collected and then sent to the processing plants by trucks for extraction.

The fresh fruit bunches (FFB) are brought to the mill by trucks which are weighed on the weigh bridge before emptying their content in large cages at the offloading bay. These cages are then placed into the sterilizers. 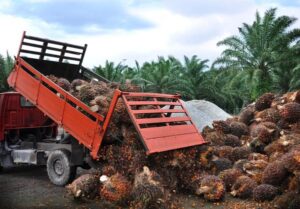 The steriliser is similar in function of a pressure cooker. The fruits are heated with steam at a pressure of approximately 3barg for about one hour. This cooking process softens the fruits, enables the separation of the fruit from bunches and stops the enzymes that cause the increase of FFA (free fatty acids) in the fruits. 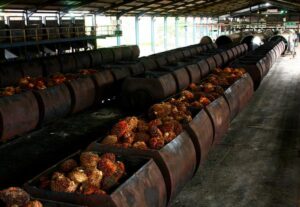 In the next stage the cages with sterilized fruit bunches are emptied in the thresher. This machine is a rotary drum of about 2 meters in diameter.  The drum rotates and bunches get lifted up and dropped when they reach the top of the drum. This action helps the detachment of fruits from the bunches and the separated fruitlets fall through the slots of the drum to a conveyor below, while the empty fruit bunches are returned to the plantation or used as boiler fuel. The fruits are then transported to the fruit digester.

Fruits are placed in a steel vat known as a fruit digester into which steam is injected and then mashed by sets of stirring mechanical arms to loosen the fibre from the nuts of the fruits. The oil extracted from such mashing then undergoes purification.

The fibre/nut mash is placed in a perforated press cage and pressed to squeeze the oil and moisture from the fibre/nut mash, leaving a compacted mass known as the press cake. The oil extracted from such pressing undergoes purification.

The oil collected from the fruit digestion and pressing processes is sieved to remove any remnant fibre and nut particles, and then collected in a tank. Steam is injected into the tank and the resulting oil/water mixture is left to settle for approximately five hours. On settling, clean oil will collect at the top of the tank whereas oil sludge will settle at the bottom of the tank. The clean oil then undergoes centrifuging in a high speed centrifuge to separate any impurities from the oil and is then passed through a vacuum drier to reduce moisture content. The purified oil obtained from the foregoing process is known as Crude Palm Oil (CPO) which is stored in oil storage tanks and then delivered to a refinery. During storage the palm oil must be kept at 31 to 40°C to keep it in liquid form. This is generally done by using steam heated coils in the tanks.

After digestion of the palm fruit and extraction of the palm oil from the mash, the nuts and fibres are recovered. First they are dried and subsequently separated from each other by the use of a cyclone system. The fibres are relatively light and are carried away by an upwards air flow, the nuts are relatively heavy and fall into a rotary drum. The fibres serve as fuel for the steam boilers. The nuts are transported to a silo where they are dried; this facilitates the cracking of nuts to recover the palm kernel. After being sent to the cracker, the shells are recovered and used as fuel for the boiler, whereas the palm kernels are transported to a silo where they are dried. The kernels are then ready for extraction of the crude palm kernel oil.

The fibre from the fruits after pressing and the shell from cracked nuts are sent to the boiler for burning as fuel. The steam generated by the boiler is used to drive a steam turbine which is coupled to an alternator to generate electricity. The steam boiler also provides process steam for sterilisation, etc.

Palm oil mills are located in plantations that are far away from major towns and this self-sufficiency works well.