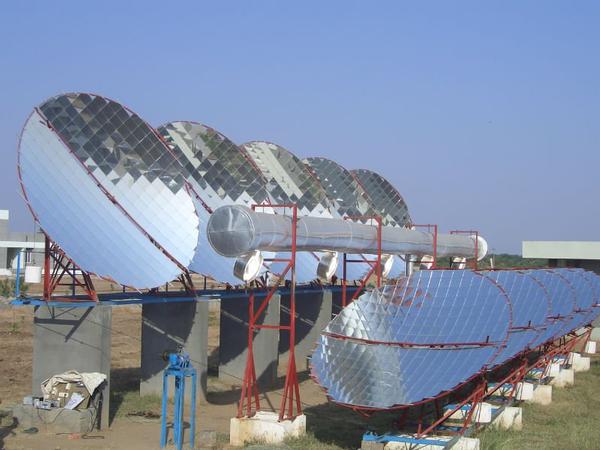 While India is well-known for delicious food, a less well known fact is that solar cooking using steam is growing in India. Solar cooking in India has received steady support from the Indian government, non-profit organizations and several international organizations too. This has led to its increased adoption in various cities, communities and villages across India.

Just one example is the vast solar steam cooking system located at Shirdi Saibaba temple in Shirdi, Maharashtra, India. It is capable of cooking 40,000-50,000 meals per day and is the world’s largest solar cooker. With nearly 30,000 visitors each day, the temple’s dining halls are some of the largest in India. The solar steam cooking system comprises of seventy-three rooftop-mounted Scheffler type reflectors of sixteen square meters each. The dishes concentrate sunlight on receivers that contain water, generating steam that is piped down to the kitchen for cooking purposes, using jacketed pans. To maintain constant focus with the sun, the dishes automatically rotate throughout the day after being manually aligned once each morning. The solar steam cooking system has been retrofitted to existing liquid petroleum gas fired steam boilers that are still used in the evening and during prolonged periods of inclement weather. The installation is expected to save around 100,000 kg of LPG per year, which is equivalent to INR 2 million (approx. US$ 45,000). The Shirdi shrine has joined two other spiritual centres, Tirupati in Andhra Pradesh and Brahma Kumari Spiritual Trust in Rajasthan’s Mount Abu, where solar systems have been successfully installed.

Why Solar steam cooking is working for India?

Advantages over other forms of solar cooking?