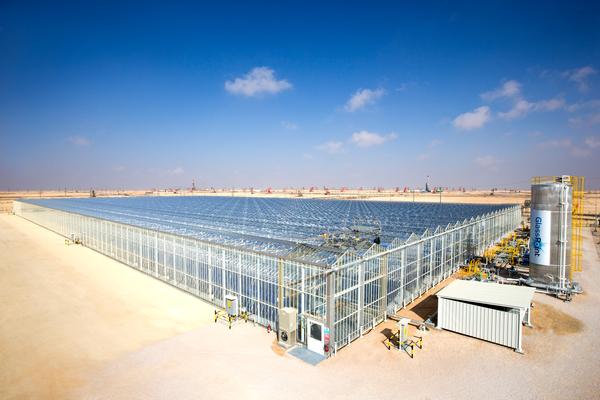 Strange as it might sound, the combination of steam and the sun is being used to help extract oil.

Around two-thirds of the oil in an average field remains underground because it is too costly to extract. If the oil is especially thick, the amount left behind can be much higher. However there are advanced technologies making it economically viable to produce the remaining oil.

This is called enhanced oil recovery (EOR).  Chemicals, gas or steam is injected into the field to boost productivity of these mature fields. When using steam, it is injecting into a reservoir and heats the oil, thinning it and making it easier to produce. It also pushes the oil to wells where it can be drawn more easily to the surface.

The power of the sun is concentrated using parabolic solar trough mirrors to convert water to steam. Parabolic trough type mirrors are curved in shape like a trough and reflect the direct solar radiation onto a receiver tube. This runs the length of the trough, and is positioned at the focal point of the reflectors. Receiver tubes carrying water are heated to steam matching typical EOR specifications. The system’s “once-through” design mimics conventional oilfield once-through steam generators (OTSGs), using the same feedwater and in the case of the Oman project delivering steam to the field’s main injection header.

The two projects use an enclosed-trough solar thermal design. The troughs are enclosed to protect them from dust and wind loading in a massive ‘greenhouse’ enclosure, with an automatic washer for the outside glass.

Thermal EOR projects require long-term thermal energy supply to heat the oil reservoir. Concentrating solar power could provide this energy, at a low cost, after the initial capital investment. Hence, thermal EOR and solar energy are two processes that are well matched. The challenges however that have remained include project economics and the practical aspects of applying concentrated solar power to thermal EOR in an oilfield environment.

Thermal EOR normally uses saturated steam, at pressures determined by formation characteristics, but typically in the 60 bar to 130 bar range. Given the “once-through” nature of EOR operations, water treatment is a critical cost factor, requiring the boiler to accept a much higher mineral content. Since steam can be moved economically only a few miles, the solar array must operate adjacent to the EOR injection wells and be tolerant of the conditions which prevail in oilfield environments.

While previous solar EOR trials and pilots have utilized sate of the art concentrated solar power (CSP) technology developed or optimized for electrical power generation and applied them to EOR, the resultant systems have been found to be uneconomic. The solar technology for EOR applications must be designed to cope with the harsh desert environment in a cost effective manner. The operating temperature is designed to match the steam conditions of the oilfield steam distribution network, which is generally in the 280°C – 330°C range. Simulation studies on solar EOR show that; “the daily cycles in solar-generated steam do not have a negative impact on the oil recovery (compared to constant-rate steam injection), as long as the cumulative amounts of steam injected into the reservoir (during the same timespan) are the same”. The thermal storage technologies (molten salt systems), which have been developed for power generation, are therefore not used.

The plant in Oman has a peak output of over 7 MW thermal. Enclosed trough represents an entirely new approach to the design and construction of concentrating solar collectors. The system is protected by a glass structure, which is similar to an agricultural greenhouse. Lightweight parabolic mirrors are hung within the glasshouse. The glasshouse provides structural support and isolates the solar collectors from wind and moisture, substantially reducing the total cost of the solar energy system. Ambient windborne sand, dust and humidity are substantial in many desert oilfield environments. The mirrors are of a low-cost, lightweight, aluminium honeycomb construction, and the structural design and low aspect ratio of the greenhouse allows it to withstand design wind loads.

In typical locations for this technology overnight condensation occurs on dust-laden surfaces, resulting in “mud” that requires wet washing. The enclosed glasshouse structure is fitted with an automated roof washing system capable of cleaning the entire roof surface each night, while the collectors are offline. The majority of wash water is returned in the gutter system and can be recovered for re-use. Dust infiltration is minimized by positive pressure from an air-handling unit, which provides filtered, dried air at slight overpressure within the structure in all conditions. This is designed to cope with intense dust storms of long duration. These measures have proven effective in delivering consistent energy output in oilfield conditions. The small losses due to roof glass transmission and structural shading are more than compensated by the soiling control and wind protection afforded by this structure.

Due to the absence of wind forces acting on the collectors, a lightweight parabolic reflector is used. The lightweight reflector enables a simple cable drive aiming system to be employed. The low system weight allows the entire mirror system to be suspended from the fixed receiver system. This fixed receiver eliminates all moving parts from the high-pressure direct steam receiver system. This enables the pressures necessary for oilfield steam generation at low cost, and eliminates safety risks and maintenance requirements associated with articulated high-pressure receivers. The direct steam system eliminates other costs and risks of traditional CSP systems, such as heat exchangers and flammable heat transfer oils. A proprietary solar receiver technology is employed, based on a standard, 2-inch carbon steel boiler tube, similar to those used in oilfield boilers. The receiver tube is polished and coated, with a selective absorber coating that maximizes the absorption of solar radiation, while minimizing the losses via the emission of infra-red radiation. Tubular glass shields minimize heat losses from convection.

The glasshouse structure carries the receivers and troughs. The receivers are suspended from the structure by steel rods. The troughs are supported from the receiver tubes using similar rods. These rods are held in tension and can accommodate the significant daily thermal expansion and contraction of the receivers and troughs, while maintaining precision alignment of the optical system. The boiler system is specifically designed to mimic a conventional oilfield OTSG boiler process, and accommodates feed water, with total dissolved solids as high as 30,000 ppm, and produces 80% quality steam at 100 bar. The control system tightly calibrates the steam quality to avoid precipitating scale deposits within the evaporator tubes. Even so, some scaling might occur. The system design therefore incorporates features to enable receiver cleaning in the same manner as a standard oilfield boiler. Steam quality is controlled via a separator and re-mixing system. The steam is separated in a vessel, and the flow of steam vapour and liquid is measured. The two streams are then re-mixed at the target steam quality. Excess liquid can be recycled to the insulated water supply tank, so energy is not wasted. The system is connected to the existing main steam header.

Solar EOR can be configured in different ways to make the best use of the energy from the sun. During the day, steam produced with solar energy reduces the amount of natural gas burned. However, because oil is produced both day and night, solar steam generators are used in combination with fuel fired steam generators to produce steam on a 24-hour basis. These integration strategies are:

During the day, solar steam is produced, and at night, gas is burned to produce steam. Automatic control systems vary the firing-rate of the fuel fired steam generator to maintain a constant rate of steam injection both day and night.

Most fuel fired steam generators have a minimum firing rate of around 30%, which means that during daytime solar can provide at most 70% of the steam required. At night, when there is no solar steam, the fuel-fired steam generators provide 100% of the steam required. The net result is that solar can reduce fuel consumption by around 25% on an annual basis.

In this configuration, the same amount of steam is injected as in the constant rate case, but more is steam generated during the day, and less at night. This variable rate steam strategy allows solar to provide a larger percentage of the overall steam requirement. To achieve this, the fuel fired generators are configured to run at a constant “base rate” both day and night. However, during the day, solar generated steam is produced in addition to the base rate of fuel fired steam, so that more steam is generated by day (base rate + solar) than at night (base rate alone). The maximum reduction in gas use depends on the exact characteristics of the reservoir, but in most cases fuel consumption can be reduced by up to 80% using this technique.

As described earlier in this article, it has been shown that oil production is not affected by variable rate steam injection. This is due to the huge thermal mass of the oil formation, which means that the amount of oil produced depends solely on the total amount of steam injected, not the hours in which it is injected.