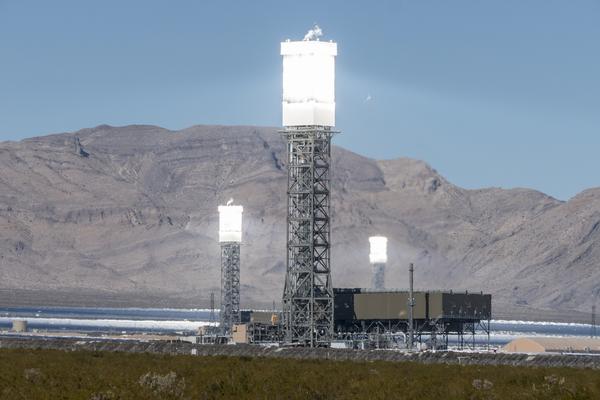 Solar, google, and steam are three words which you may not associate together. Well you may wish to think again. The largest solar thermal power plant in the world, part owned by Google uses steam and steam turbines to convert the energy of the sun into usable electricity.

The Ivanpah solar power plant is located on the California-Nevada border southwest of Las Vegas in the USA. It consist of about 350,000 mirrors, each the approximate size of a garage door. These mirrors reflect the energy from the sun onto three towers which generate steam to turn the turbines. The turbines generate electricity for about 140,000 homes. By using the energy of the sun, a reduction of approximately 400,000 tons of carbon dioxide per annum has been achieved over generation using fossil fuels. This equates to taking about 70,000 cars off the road.

The plant generates electricity the same way that most of the world’s electricity is produced, namely by heating water to create steam, to turn a steam turbine. However, instead of burning fossil fuels to create the steam, by clever design the energy of the sun does it. The software controlled mirrors track the sun in two dimensions and reflect the sunlight to boilers that sit atop three 459 foot tall towers. When the concentrated sunlight strikes the boiler’s pipes, it heats the water to create superheated steam. The steam is then piped from the boiler to a Siemens steam turbine where electricity is generated. From here, transmission lines carry the power to homes and businesses. The exhaust from the steam turbine is piped to an air cooled condenser which ensures the system is a closed loop.

Ivanpah 1 has a capacity of 126MW, while Ivanpah 2 and 3 each have a capacity of 133MW. All three units should be operational by the end of 2014. The Ivanpah Solar Electric Generating System (SEGS) is owned by NRG Energy, Google, and BrightSource Energy.  The project has a total value of $2.2 billion.

The BrightSource Energy design has may claimed benefits over other solar technologies. These include:

The plant has been criticised by some who complain about birds being burnt and killed. This was anticipated, as the air surrounding the towers can reach very high temperatures. When put in perspective the actual numbers do not appear high. Any source of energy has an impact on the environment, however Ivanpah is as close to zero environmental impact as it gets for power generation, and it is great to see that steam is playing its part in it.