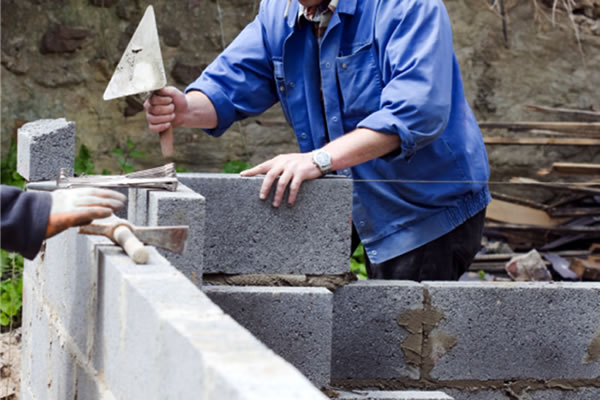 Aerated concrete blocks, are very popular in the building industry. Most new homes built in the United Kingdom use them in their construction and they are used extensively worldwide. The usual building construction mode being a brick outer wall, cavity (which may be partially filled to achieve desired U-value), and an aerated concrete inner wall which is tied together across the cavity using ties. There is good reason for the use of aerated blocks. Aerated blocks are much lighter and have far better thermal insulation properties than solid concrete blocks. If you were to cut an aerated block you would see the structure which consists of pockets of air which have been formed throughout the inside of the block. Not unlike an ‘Aero’ chocolate bar when you have bitten into it! This gives the block its light weight, good thermal properties, and make it easy to cut and work with. To gain all of these advantages, steam is vital for its manufacture.

The low density is achieved by the formation of air voids to produce a cellular structure. These voids are typically 1mm-5mm across and give the material its characteristic appearance. Blocks typically have strengths ranging from 3-9 Nmm-2 (when tested in accordance with BS EN 771-1:2000). Densities range from about 460 to 750 kg m-3; for comparison, medium density concrete blocks have a typical density range of 1350-1500 kg m-3 and dense concrete blocks a range of 2300-2500 kg m-3.

Aerated blocks have been produced for over 70 years and are manufactured by a number of different companies. The most common size for each block is 440 x 215 x 100mm, however different sizes can be made. The blocks are made with sand, lime and/or cement, and water. Some manufacturers will use fly ash from power plants as an aggregate. A very small amount of aluminium powder is added to the mix also (less than 1%). When these components are mixed they are poured into a mould where a chemical reaction takes place. The aluminium reacts and gas is formed which bubbles the mix increasing it volume considerably. When this foaming action is complete the blocks dry and become solid but they are still soft. To harden them they must next be cured.

The key role that steam plays is in the block curing. This is done in an autoclave which is a long cylindrical pressure vessel tall enough for a person to stand in. A block manufacturing site will have multiple autoclaves, maybe as many as twenty if it is a big site. The first step in the curing process is for the blocks which are solid but still soft are wheeled into an autoclave, which is normally about 3 meter in diameter and 45 meters long, the door of the autoclave is then shut. Steam can then be introduced to the autoclave until the desired pressure is reached which is normally in the 14 barg region. To save energy, steam can be transferred from an adjoining autoclave which has just completed its cure cycle, to the autoclave which is about to start. This transfer steam will only bring the start autoclave partially up to pressure and additional steam from the steam boiler will be required to get to the desired cure pressure. Once the desired cure pressure is achieved in the autoclave the blocks will be ‘cooked’ for approximately 8-10 hours. Additional steam will only be added to replace that, which has been condensed and removed by the steam trap at the bottom of the autoclave. Throughout the cure time the pressure and temperature of the steam is continuously monitored in the autoclave to ensure the end quality of the blocks. At the completion of the cure time the autoclave is drained of steam and condensate. This is done by first transferring steam to another autoclave which is starting (if there is one). Once this has been completed the autoclave is blown down of the remaining steam and condensate. This would normally be sent to an effluent recovery pit as it is contaminated with block dust and unsuitable to be returned to the boiler feedtank for re-use by the steam boiler. Steam will be in the space in the autoclave and in the blocks themselves which is why the blowdown must be done carefully to make sure block quality is not affected. Once atmospheric pressure is reached the blocks can be removed from the autoclaves. They will then be loaded on pallets and shrink wrapped with the manufactures logo before sending to the customer. The whole process can be automated and traces of pressures, temperatures, and cure times can be kept in case of any subsequent quality issues with block batches.