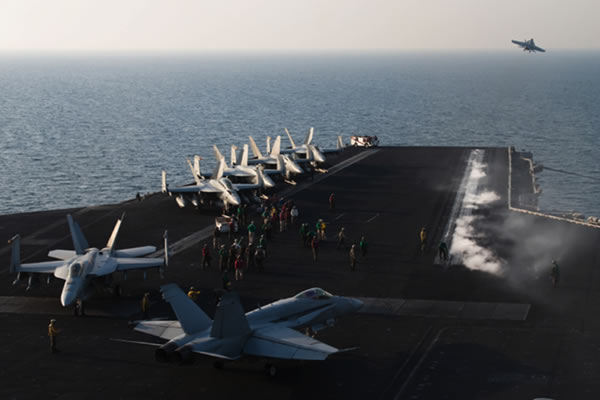 Thanks to steam and its unique properties, state of the art supersonic jet aircraft, can take off armed and fuelled from the short deck of an aircraft carrier. Something, which would otherwise take several thousand feet of runway. Steam catapults are also used to launch heavy propeller driven airborne early warning, and carrier on board delivery aircraft from aircraft carriers.

Modern navies with aircraft carriers can project power worldwide from the sea without dependence on other governments or local bases. A prime example of this is the United States Navy which operates ten; catapult assisted take-off but arrested recovery carriers (CATOBAR) fleet carriers, and is building further examples. It has often been said that throughout the history of carrier aviation, the first thing a US President asks during times of crisis is: “Where is the nearest aircraft carrier?” Steam catapults are used by the United States, French, and Brazilian Navies on their aircraft carriers.

There are of course other aircraft carriers that do not use steam catapults. These types of carriers can be divided into the following types; STOVL or STOBAR.

STOVL stands for; short take-off and vertical landing. These types of aircraft carriers do not use catapults to launch fixed wing aircraft with short take offs accomplished with the use of a trust thrust vectoring aircraft, often in conjunction with a runway “ski-jump”. Examples of these types of aircraft include the Harrier, Yak-38 Forger, and in the future the F-35B Lightning II. One of these types of aircraft carrier is in service with India and two for Italy, Spain also operates one amphibious assault ship as a STOVL aircraft carrier so there are four ships total in active carrier service. Some also count the nine US amphibious assault ships in their secondary light carrier role. STOVL carriers can be smaller and more flexible than CATOBAR types. The disadvantage of these types of aircraft carriers without steam catapults is that they have to use STOVL aircraft which generally have more limited payloads, and lower performance when compared with conventional fixed-wing aircraft despite their ingenious lift or vectored thrust engines. The future F-35B Lightning II STOVL jet does however promise to close the size of this gap compared to conventional take off aircraft. This is thanks to its ingenious lift fan system. The two new Queen Elizabeth class aircraft carriers for the Royal Navy will be STOVL types, using the F35B, but could be reconfigured to use catapults at a later stage due to their size and flexible design.

STOBAR stand for; short take-off but arrested recovery. It combines elements of both STOVL and CATOBAR. Aircraft launch under their own power using a ski-jump to assist take-off (rather than a catapult). However, these are conventional, rather than STOVL aircraft, and thus require arrestor wires to land on the ship. The STOBAR system is simpler to build than CATOBAR, however it works only with aircraft that have a high thrust to weight ratio. Also these aircraft can only launch with limited payloads and fuel. The Russian Navy aircraft carrier Admiral Kuznetsov was the first STOBAR carrier. Other aircraft carriers that feature a STOBAR configuration include the Indian INS Vikramaditya, as well as the yet to be launched INS Vikrant, and the Chinese aircraft carrier Liaoning.

The history of the steam catapult goes back to the days after world war two when jets where starting to come to the fore in naval aviation. The rise in importance of the aircraft carrier to navies began prior to world war two and grew exponentially during the conflict, eclipsing the big gun battleships by the end of the conflict. As these carriers developed and became bigger their air fleets became bigger and faster, from draggy piston engine biplanes to sleek monoplanes. However the take-off speeds of even the fastest piston engine carrier aircraft were not a huge issue for carrier aviation. The coming of the jet powered naval aircraft changed all of this. Jets became heavier and needed to launch at higher speeds.

The modern steam catapult was “invented” in the 1950’s by the British and trailed on the aircraft carrier HMS Perseus. Today’s super carriers like the USS Nimitz class have four steam catapults for launching fixed wing aircraft from its decks. There are two “bow”, and two “waist” catapults on board. On a nuclear powered aircraft carrier steam is generated from the heat of the nuclear reactors. Steam is piped to where the steam catapults are located, below the decks on the front portion of the ship.

A steam catapult can safely launch aircraft from carrier decks, day or night and in almost any kind of weather. The steam catapult is designed to launch the aircraft with the ship headed into the wind, but has the capability to launch aircraft downwind, alongside the pier of at anchor. However if the aircraft is not launched into and with the assistance of the wind over the its wings, reduced fuel or weapons loads can result.

A steam catapult consists of a steam accumulator/receiver, two cylindrical tubes which run under the deck, two pistons which run inside these tubes, a shuttle which is visible at deck level and to which the aircraft is attached to, a launching valve, a water brake, and a retraction system.

The launch valve assembly is located between the two steam lines from the steam receiver/accumulator and the thrust exhaust unit. The steam valve admits and shuts off the flow of steam to the launching cylinders during catapult operation. The opening of the steam launch valve when the catapult is fired, is timed in seconds and hundredths of seconds.

A butterfly exhaust valve is mounted off the bottom of the thrust exhaust unit and is used to release spent steam in the cylindrical tubes under the deck after launch. As well as being used for motive force in the catapult itself, steam is also used for heating the catapults troughs, and for a steam smothering system in case of fire.

If we now run through the launch sequence on deck; to prepare for a take-off, the flight deck crew moves the aircraft into position at the rear of the catapult. On modern aircraft, like for example the F18 Super Hornet, the front nose wheel leg incorporates the launch bar and hold back bar. Forward of the nose wheel strut is the launch bar that hooks into the catapult’s shuttle, the part of the catapult that drags and accelerates the plane up the deck. Behind the strut is a “holdback fitting” that attaches to the holdback bar, attached to the carrier deck, that holds the aircraft stationary until the moment of launch.

On older aircraft, for example the A4 Skyhawk, a cable bridle was looped around the nose of the shuttle and its ends connected to launch hooks in the wheel wells of the aircraft. Just under the tailhook is a connection point on the A-4 for the hold back. A breakaway link, inserted in the holdback, fails at a specific tension when the catapult fires to allow the shuttle to pull the aircraft down the deck to flying speed. The breakaway link and the steam pressure setting must coincide with the aircraft’s type and weight to ensure a successful launch.

While the aircraft’s is being fixed to the catapult, the flight crew simultaneously raise the jet blast deflector (JBD) behind the aircraft. When the JBD, towbar and holdback are all in position, and all the final checks have been made, the catapult officer (also known as the “shooter”) gets the catapult ready from the catapult control pod, a small, encased control station with a transparent dome that protrudes above the flight deck.

The catapult officer carefully monitors the steam pressure level so it’s just right for the particular plane and deck conditions. If the pressure is too low, the plane won’t get moving fast enough to take off, and the catapult will throw it into the ocean. If there’s too much pressure, the sudden jerk could break the nose gear right off.

When charged to the appropriate pressure level, the pilot increases the plane’s engines to full power. The holdback keeps the plane on the shuttle while the engines generate considerable thrust. The catapult officer releases the pistons, the force causes the holdbacks to release, and the steam pressure slams the shuttle and plane forward. At the end of the catapult, the tow bar pops out of the shuttle, releasing the plane. This totally steam-driven system can rocket a 20,000-kg plane from 0 to 165 miles per hour in two seconds! The pistons are then slowed towards the end of the tubes by the water brake. With the launch complete the pistons can be moved back to the start position ready for the next aircraft launch.

The US Navy is currently developing a new catapult system for its future Gerald R. Ford class carriers. The Electromagnetic Aircraft Launch System (EMALS) uses a linear motor drive instead of the conventional steam piston drive. It’s safe to say however that there is still plenty of life in the steam catapult yet.