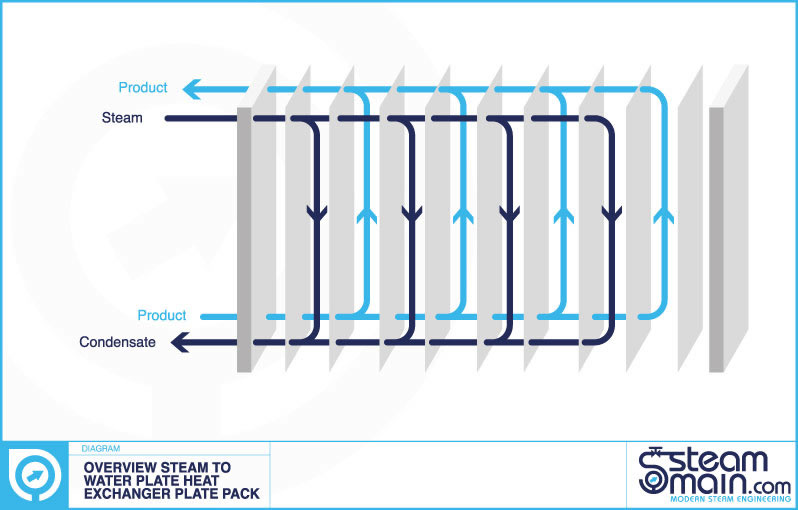 Steam is used in many applications as a primary heating medium, typically to heat water. An increasingly common way of doing this is to use a plate heat exchanger. A plate heat exchanger consists of a number of ‘plates’ packaged together with openings between them to allow the passage of fluids. The plates themselves are thin pieces of corrugated metal. They have corrugations on their surfaces for strength and also to create turbulent flow through the channels. The plates are packaged together so that there is a channel between each of the plates. Every second channel is open to the same fluid, this allows two fluids to flow through the plate heat exchanger, a primary and secondary medium.

The packaging and design of the plates means that a very large heat exchange surface area can be incorporated in a very compact unit, with very high efficiency. Plate heat exchangers can generally be divided into three main types. These being:

The gasketed type uses gaskets fitted between the plates, and sandwiched between a pressure plate and a frame plate at each end. Gaskets can be clip on or glue on in type, and are compressed using long bolts. This allows for easy inspection strip down, cleaning, and modification of capacity by adding or removing plates. Gaskets can be constructed of Nitrile, EPDM, or Vinton, depending on temperatures. Because of the flexibility of a jacketed plate heat exchanger it is used in a large number of HVAC applications. Examples being steam to water for heating or hot water.

Brazed heat exchangers allow for higher pressure and temperature duties than the jacketed type. The brazed type is like the gasketed type made of a series of corrugated plates. However rather than having gaskets, tightening bolts and a frame round it, the plates are brazed together in a vacuum furnace. Copper is the usual brazing medium. Due to the fact that the plates are brazed together the unit cannot be stripped down for cleaning. If cleaning is required the unit can be back flushed or chemically cleaned. Whilst the brazed construction allows for higher pressures and temperatures they are not flexible like a gasketed type. This means that brazed units are not generally used on applications where they could be exposed to thermal fatigue, for example uses which have sudden temperature changes.

All welded plate heat exchangers are similar to gasketed types. The only difference being that the gaskets are omitted and replaced with laser welds. By using appropriate welding techniques the plate pack can expand and contract. This allows applications which have large temperature fluctuations. The all welded plate pack type is generally used in heavy process industries which demand high temperature and pressure limits. On applications where steam is the primary medium for heating of a secondary medium, (for example water) there will be a temperature set point. To achieve the desired temperature set point, control equipment is required on the primary side. The most common control configuration is steam primary control where a two port steam control valve modulates the flow of steam into the plate heat exchanger to achieve the desired secondary set point off the plate heat exchanger. This configuration is easy to understand and provides fast changing response to load changes. The condensate from the heat exchanger is removed using a steam trap or a steam powered pump trap depending on the condensate return route and design.