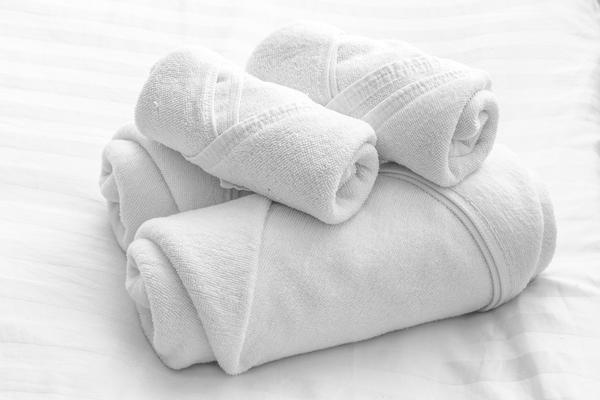 Ever wondered how sheets, pillow cases, and table linen are pressed on a large scale for large hotels? Laundry services are normally outsourced and/or centralised by many large organisations. These may be hotels, hospitals, even prisons. Laundries that have a capacity of over 500 kg of textiles per day will typically use steam, with a central steam boiler and steam system.

So what is steam used for in commercial laundries? Applications can include; ironers, presses, tunnel washer, wash water heating, and factory heating.

Flatwork ironers are machines used to automatically press sheets, pillow cases, table linen, etc. Their primary purpose is to remove wrinkles and they also dry the linen at the same time. If you want to achieve a 3-star rating or higher for a hotel, you must iron the sheets!

The ironer is a machine with a large, heated roller that sheets are fed into for the roller to iron and dry them. Whilst there are other heating options, (gas, oil and electric) steam ironers are the most popular, served with steam from the central steam boiler.

An ironer’s production is described as how many sheets per hour it can process. This is a factor of how many feet per minute of material the ironer can churn through. The number and size of heated rollers in an ironer determines how many pieces per hour can processed. Each wet sheet will take heat away from rollers with evaporative cooling.

Ironers can be fitted with feeders and/or folders to truly accelerate production. A feeder allows a single worker to feed 400 or more sheets per hour into the machine. The employee reaches into a pile of clean, wet linen, grabs a sheet, locates a corner of the sheet and sticks it into a small clip on the front of the machine. Then they locate the next nearest corner of the sheet and clip it into another clip and hit a button. The feeder instantly draws the wet, clumped sheet into the machine and almost magically it is able to completely spread out the sheet and feed it perfectly into the ironer in an instant.

A folder is exactly that, a folder. This equally advanced piece of equipment can take sheets coming from an ironer and almost instantly fold them into a small block of predetermined size. As a sheet comes off of the heated rollers, an air stream draws the long end of it into a slot and pulls it off the end of the roller. Another air stream pulls the trailing end back and when the sheet is midway over another slot in a perpendicular direction, another stream of air pulls the sheet down folding it in half. It does this several times in rapid succession until the sheet is perfectly folded in a block. A folder can also have a stacker attachment that will neatly stack a specified number of sheets before sending them on their way down a conveyor to a wrapping or banding machine.

These use steam to press a garment which is individually loaded and removed from the press.

The hot head press has been developed from the hand iron. The work is placed on a padded table called a buck and a polished, steam heated metal head is brought down and held with some pressure to provide a pressed finish.

Various designs of hot head press are seen in commercial laundries, these include; the rotary press, scissor press, and cabinet units.

The ‘free-steam’ press uses live, low pressure steam which is blown onto and through the fabric to help remove creases and at the same time shape the garment. These presses are used on items that are already dry. They have a padded buck and padded head, the padding covering perforated metal distributors which allow steam to be blown uniformly through the padding into the garment. To remove the moisture and thus assist drying after steaming, the lower buck is fitted with a vacuum.

Steam tunnels are exactly that, a tunnel filled with steam. The purpose of such a device is to give garments made of a mixture of poly and cotton fibres a ‘pressed’ look without actually having to press them.

A steam tunnel can be operated by a single person and can process hundreds of garments as compared to a hot-head press or other type of finishing equipment that only processes one or two pieces at a time. The garments are hung on a conveyor belt that takes them through a steam filled tunnel heated to the proper temperature to bring about relaxation of the fibres within the garment and eliminate any wrinkles. When the garment comes out the other end, it looks like it was pressed and in only a tiny fraction of the time it would normally take if done individually by hand.

A steam tunnel is supplied with steam from the main steam boiler.

The textile services industry is a competitive business and margins can be tight. The good news is that lots of commercial laundries have scope for optimising their steam and condensate systems for cost saving.

The biggest source of energy loss is the boiler flue and the second is the wasted heat that results from failure to make efficient use of condensate and flash steam.

One way to try and make use of the energy loss in the boiler flue is to install an economiser. A feedwater economiser is a heat exchanger which recovers heat from the flue gas and transfers it to the feedwater going into the boiler. The recovery of this heat means that less fuel is required by the steam boiler. On a typical shell type steam boiler, flue gases are often rejected to the stack at temperatures 100°C -150°C higher than the temperature of the generated steam. The potential for energy saving depends on the type of boiler installed and the fuel used. For a typical shell boiler the increase in overall thermal efficiency would be in the order of 3 – 5%.

There are limits to the amount of energy that can be removed from the exhaust gas. This is due to there being a lowest temperature limit, to which flue gases can be cooled to. Criteria such as dew point, cold-end corrosion, and economic heat transfer surface need to be considered. These criteria are dependent on the fuel type. When using fuels other than gas, regular cleaning regimes of any possible fouling of the economiser heat exchanger needs to be considered.

If retro fitting to an existing boiler, the level control system should be of a suitable type. Because the economiser is on the high pressure side of the feedpump, feedwater temperatures in excess of 100°C are possible. Therefore the boiler water level controls should be a modulating type, (i.e. not ‘on-off’). This ensures that there is always a continuous flow of feedwater through the heat exchanger.

Hard working laundry equipment releases its condensate through steam traps. However due to the steam supply pressure and the steam usage, the condensate cannot retain its liquid form in the condensate pipework where the pressure is much lower (some will be atmospheric) so around 10 % flashes off to form low pressure steam.

This mixture would once have been returned to the top of the boiler feed tank, where much of its energy would have been lost as a plume of steam from the large vent pipe on the feed tank. This plume was the hallmark of the steam laundry. It need not be like this however.

The condensate can be piped through a flash steam separation vessel, with the lower pressure flash steam being used to heat wash water or other low pressure steam equipment.

The vessel separates out the valuable flash steam so it can be re-used. If the flash steam is mixed into the feed tank its heat will make the feed water too hot to pump safely.

The use of the flash steam also means that there is no need for a trademark plume of steam coming from the roof of a laundry boilerhouse.