Turbinia and the steam turbine 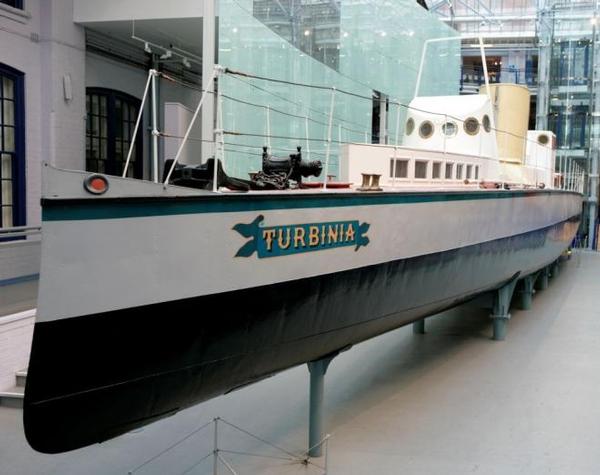 Known as the ‘North Sea Greyhound’, the Turbinia was a revolutionary ship designed and built by Charles Parsons in conjunction with Brown and Hood, a firm of experienced sheet metal workers based in Wallsend on Tyne in the north east of England. She was launched on 2nd August 1894.

Originally designed and built to demonstrate the benefits of his already successful steam turbine engines, its initial outing was rather disappointing, powered by just one single steam turbine, it achieved just 19.75 Knots.

The steam turbines were powered by a three drum, water tube coal fired boiler with a double ended heating surface, which was capable of delivering 170 psi of pressure at the turbine.

With the redesigned layout, Turbinia held the title of World’s Fastest Ship until 1899.

Generating approximately 2000 HP, there was no other ship capable of coming close to its top speed of 34 ½ Knots as demonstrated at Queen Victoria’s Diamond Jubilee Naval Review, Spithead in June, 1897. Conflicting stories will have you believe that the Turbinia and Parsons pulled off the greatest publicity stunt of all time by ‘invading’ the review, but in actual fact, they attended with full permission from the Navy; however it does seem as though Turbinia showed off her speed to full potential. ‘To the consternation of the Navy’s top brass, the little Turbinia tore between the assembled ranks of flag bedecked ships. The fleet’s fastest destroyers were ordered to intercept the intruder, but in vain. It showed them a clean pair of heels’.

Never before had it been possible to fit so much power in such a small hull, the steam turbine engine didn’t have any of the drawbacks associated with reciprocating steam engines; they were much smaller and ran vibration free which in turn meant they had no need for large foundations for them to be placed on; this made it a perfect solution for the problems presented by spatial confines. The turbine engines gave improved speed and acceleration and were significantly more fuel efficient than even the most modern of reciprocating steam engine.

It is said that a trip on the Turbinia at full speed was a somewhat terrifying experience, the bow rearing up out of the water, the deck awash to the point that onlookers would fear the worst, a deafening roar of mechanical noise and the funnel glowing red, spitting flames into the atmosphere. The funnel needed a repaint after each high speed demonstration.

On the 11th January 1907, disaster struck the little Turbinia. Whilst travelling on the river Tyne, she was struck by the Crosby, a newly built ship being launched from the South bank. The collision almost cut the Turbinia in two.

She was repaired and on the 20th September 1907, she steamed alongside the RMS Mauretania on her launch, but mechanical problems meant that she couldn’t steam down the Tyne to the sea.

In 1908, the Parsons Marine Steam Turbine company decided to take the Turbinia out of service, resting her up onshore before offering her to the London Science Museum. Due to space restrictions, she was cut in-to two parts, the after section, complete with engines and propellers, went on display in the South Kensington museum in 1926.

The fore section stayed in the north and in 1944, was presented to Newcastle Corporation and went on display in the city’s exhibition park.

After thirty three years on display at the London Science Museum, the after section also headed north to be re-united with the fore section. A reconstructed centre meant that she could be displayed as a whole ship in the Newcastle Municipal Museum of Science and Industry.

100 years after her launch, October 1994 saw the Turbinia move to her new (and final) resting place, Newcastle’s Museum of Science and Engineering, later to be known as the Discovery Museum. She was put on display to the public in March 1996.

After being added to the Core Collection of the National Historic Fleet in 2000, the Discovery Museum began a £10.7m redevelopment programme, featuring the Turbinia as star of the show. She now rests under a glass ceiling, three floors surrounding her, offering excellent viewing access to all angles. Resplendent in her original colours, the brass propellers highly polished and shining, Turbinia is an object of beauty.

The Newcastle Discovery Museum houses the Tyne & Wear Shipyards Collection, and has been included on the UNESCO Memory of the World register.

Video of Turbinia at the Newcastle Discovery Museum (external link):