Using the sun to generate steam 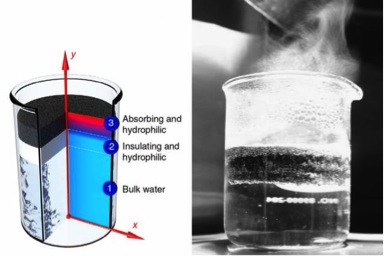 One example of this is at the Massachusetts Institute of Technology in the USA. A team of researchers have developed a new material structure which generates steam by soaking up the energy of the sun. Whilst still at an early stage it would potentially have many applications. It would be particularly useful where the sun is the only source of energy. Vital tasks like; desalination, hygiene systems, and sterilization could be carried out using steam generated from small scale steam generators. The structure consist of a layer of graphite flakes and an underlying carbon foam. This porous insulating material structure floats on water. When sunlight hits the structure’s surface, it creates a hotspot in the graphite, drawing water up through the material’s pores, where it evaporates as steam. The brighter the light, the more steam is generated.

The new material is claimed to be able to convert 85 percent of incoming solar energy into steam. This would be a significant improvement over current solar-powered steam generation technology. The setup loses very little heat in the process, and can produce steam at relatively low solar intensity. Thus potentially, if scaled up, the setup would likely not require complex, costly systems to highly concentrate sunlight.

The MIT approach generates steam at a solar intensity about 10 times that of a sunny day, the lowest optical concentration reported thus far. The implication, the researchers say, is that steam can be generated with lower sunlight concentration and less-expensive tracking systems.

The approach itself is relatively simple; since steam is generated at the surface of a liquid, MIT looked for a material that could both efficiently absorb sunlight and generate steam at a liquid’s surface.

After trials with multiple materials, they settled on a thin, double-layered, disc-shaped structure. Its top layer is made from graphite that the researchers exfoliated by placing the material in a microwave. The effect, is “just like popcorn”: The graphite bubbles up, forming a nest of flakes. The result is a highly porous material that can better absorb and retain solar energy.

The structure’s bottom layer is a carbon foam that contains pockets of air to keep the foam afloat and act as an insulator, preventing heat from escaping to the underlying liquid. The foam also contains very small pores that allow water to creep up through the structure via capillary action.

The researchers tested the structure by placing it in a chamber of water and exposing it to a solar simulator, a light source that simulates various intensities of solar radiation. They found they were able to convert 85 percent of solar energy into steam at a solar intensity 10 times that of a typical sunny day.

Image in this article courtesy of MIT