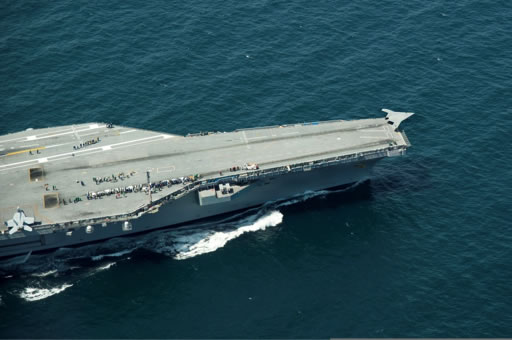 The Northrop Grumman X47B has been constructed as a demonstrator for research into unmanned combat aircraft which can operate from the decks of an aircraft carrier. The program is hoped to result in an operational aircraft by 2019. The X47B has an approximate wingspan of 20 meters, and is shaped to be low observable by enemy radar due to its blended shape and internal weapons bay. These ensure that there is little radar return from the aircraft. It has been designed to provide a high degree of autonomy during operations, this is a step on from a simpler ‘drone’ which has real time human control during the majority of its use. It weighs in at about 6,000 kg empty but can have an all up weight including fuel and weapons of up to approximately 20,000 kg.

The nuclear powered aircraft carrier USS George H.W Bush is powered by two Westinghouse A4W nuclear reactors. These produce the heat energy to generate steam. This steam is used by the four steam turbines on board to propel the ship. However some of this steam is piped to where the steam catapults are located, below the decks on the front portion of the ship. There are two “bow”, and two “waist” catapults on board.

A steam catapult consists of a steam accumulator, two cylindrical tubes which run under the deck, two pistons which run inside these tubes, shuttle which is visible at deck level and which the aircraft is attached to, and a launching and exhaust valve. The aircraft is attached to the pistons/shuttle, and when it is ready for launch a steam valve off the accumulator is opened. The steam pushes the pistons down the tracks very quickly which accelerates the attached aircraft. As the pistons approaches the end of the tracks the aircraft detaches itself from the shuttle and flies away (having reached/exceeded its flying speed). The pistons are then slowed towards the end of the tubes by a water brake. With the launch complete the pistons can be moved back to the start position ready for the next aircraft launch.

It is great to see “steam” contributing to an aeronautical “first” by assisting in the launch of this aircraft.