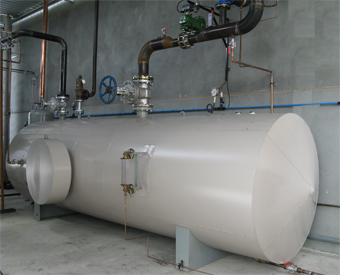 This article provides an overview into the subject of steam accumulators; what they are, why they are used, and how they work.

A steam accumulator is a pressure vessel which is used to store energy at times of surplus for release at a later time when there is demand for it. In the real world these would generally be applications where the steam demand can have sudden peaks with high instantaneous flows rates, due to the requirements of the process. Steam accumulators are also starting to be used on concentrated solar power plants, allowing power production at night time.

Steam accumulators have been around for many years, indeed many early steam accumulators were converted boilers which were used for their water storage capacity rather than their firing ability. The utilisation of steam accumulators was not restricted to static installations either. Fireless steam locomotives were used extensively for shunting duties in inflammable environments such as munitions factories, gas works, and oil refineries. The locomotive would be charged overnight with steam from the factory’s main boiler plant. The charged steam in the accumulator could then be used to power the locomotive the next day.

Steam accumulators are used even more today and are not old fashioned relics of the past.  One reason for this is that modern boilers are significantly smaller than their counterparts of only 30 years ago. This reduction in boiler size has been brought about by the drive for more efficient boiler operation, the requirement for boilers to take up less floor space, and pressure to keep the capital costs as low as possible.

The result is that modern boilers use more sophisticated boiler controls and burners which respond faster and more accurately to changes in demand than those of bygone years. Response times have also been improved by physically reducing the external dimensions of the boiler for any given output, and by maximising the space inside the boiler shell for the tubes which increases the heat transfer area.

It follows that modern shell boilers hold less water, only 20% of the water when compared with a similarly rated Lancashire boiler of the 1950s. The greater heat transfer area per kg of water for the modern design means that whilst it can rapidly evaporate water in the boiler to satisfy demand, there is a limit to what modern boilers can do. When the size of large peaks in demand exceed the ability of a modern boiler to cope a solution must be sought.

Pressure maintaining valves on steam boilers can be used to maintain the pressure in the boiler or a steam header. These valves can give priority to steam flow to essential plant and processes. They ensure that the steam boiler is protected from the sudden load demands which could otherwise cause the carryover of water into the steam system, and even boiler burner lockout if the water level collapses. There is however a limit to what can be done using pressure maintaining valves (sometimes called surpassing valves) if the peaks are large, for example in batch processing industries. Pressure maintaining valves may not overcome a sites fundamental problem of not having enough steam for the process. This is when a means of storing energy in the form of steam is normally considered.

Modern steam accumulators are carefully sized for the demands of the process that it is attached to. For example in a rubber manufacturing plant sudden steam demand can be created by a number of autoclaves being switched on. The accumulator allows the steam boiler plant to operate under steady state load conditions by storing steam at times of low steam consumption, and releasing it to meet peak demands (in this case when the autoclaves are switched on).

The accumulator itself consists of a cylindrical vessel partially filled with water. The water level would typically be between 50 and 100%. Steam is charged into the vessel during the charging stage using steam injectors below the surface of the water. The water in the vessel takes up the latent heat from the steam thus condensing it back into water. There is a corresponding rise in temperature and pressure within the accumulator and also an increase in water volume.

When the accumulator is required to discharge steam at a lower process pressure steam is flashed off from the high pressure, high temperature water, thus reducing the total heat of the water content. The key here is the difference in pressure between the steam generating plant (and accumulator) and the final process. The greater this differential, the smaller the size of the accumulator required. In most manufacturing processes, steam is typically generated at a higher pressure than is required by process anyway. With the above in mind, and for the accumulator to function a pressure maintaining valve would be mounted between the steam boiler plant and the vessel, and a pressure reducing valve on the exit from the vessel to the plant or process.

The primary factors which need to be taken into account when sizing an accumulator are:

The table below shows some typical capacities for steam accumulators (not to be used for design purposes):

The benefits of installing a steam accumulator can be many and varied according to a particular sites need. However it is safe to assume that the following applies to most sites:

Steam boilers are at their most efficient when they are running under steady state conditions. By using a steam accumulator the steam boiler can operate in a steady state mode, despite that fact that the steam demand is fluctuating. The accumulator “smooths out” the steam load on the boilers.

Cost savings can result by using a smaller steam boiler (sized for the average steam flowrate) and an accumulator, rather than having a much larger boiler sized for the maximum peak load. Alternatively on multi boiler applications the peak load can be handled using an accumulator and the result is that fewer boilers need to be online.

A correctly sized steam accumulator will result in good quality steam being provided to the process, eliminating boiler water being carried over into the steam system. Boiler water carry over can result in production problems, as well as reduced plant life and other operational issues.

Other uses for steam storage:

As well as being used as a method of handling large fluctuating steam process loads, steam accumulators are being used for energy storage in solar power. Concentrated solar power stations use the power of the sun to turn water into steam which is used to turn a condensing steam turbine. A steam accumulator can be charged during the daylight hours. The stored steam is then released at night time to allow for further power production.